From an evolutionary point of view, macrophages are ancient cells. They form the core of the natural immune system and did appear long before the cells forming together the complex immune system of the higher vertebrates.

As a consequence, during the evolution, they did acquire functions both in natural immune reactions and in the regulation of functions of many non-phagocytic cells.

The latter functions are mainly mediated by soluble molecules such as cytokines and chemokines.

Macrophages are also involved in ‘homoiostasis’ of the body by ingesting and digesting microorganisms or non-self particles and macromolecules. Digestion is in turn mediated by their lysosomal enzymes.

Freely solved clodronate will not cross liposomal or cellular phospholipid membranes. After injection, liposomes, used as Trojan horses in this case, will be ingested and digested by macrophages followed by intracellular release and accumulation of clodronate. At a certain intracellular concentration, clodronate induces apoptosis of the macrophage.

By this approach, i.e. by creating an animal with macrophage depleted tissues or organs, functional aspects of macrophages are studied ‘in vivo’ in many collaborative projects. Moreover, promising results were obtained by application of Clodronate Liposomes for suppression of macrophage activity in various models of autoimmune diseases, transplantation, neurological disorders and gene therapy.

The Mechanism of Clodronate and Liposomes

Clodronate is not a toxic drug in itself and liposomes (if prepared of phosphatidylcholine and cholesterol) are not toxic either.

Free clodronate will not easily pass phospholipid bilayers of liposomes and cell membranes but liposomes are eagerly swallowed by macrophages.

The implication is that clodronate, once delivered into phagocytic cells using liposomes as vehicles, will not escape from the cell.

After disruption of the phospholipid. bilayers of the liposomes under the influence of the lysosomal phospholipases in the macrophage, the drug, which is dissolved in the aqueous compartments between the liposomal bilayers, is released into the cell.

The clodronate is accumulated intracellularly and after exceeding a threshold concentration, the cell is irreversibly damaged and dies by apoptosis (J. Immunol. Meth. 193: 93-99, 1996).

Free clodronate, e.g. released from dead macrophages, has an extremely short half life in the circulation. It is removed from the circulation by the renal system. Naturally, the approach can only be successful when the liposomes are able to reach the macrophages which have to be eliminated.

Vascular barriers (capillary walls) can not be crossed by liposomes.

Above: Clodronate-liposomes. Liposomes are artificially prepared spheres, consisting of concentric phospholipid bilayers, seperated by aqueous compartments. They form, when phospholipid molecules are dispersed in water. Part of the aqueous solution, together with hydrophilic molecules which have been dissolved in it, such as the bisphosphonate Clodronate (black squares; see also structural formula) are encapsulated during the formation of the liposomes.

Above: Macrophage ‘suicide’. Liposomes, encapsulating the Clodronate molecules (squares), are ingested by macrophages via endocytosis. After fusion with lysosomes (L) containing phospholipases (arrowheads), the latter disrupt the bilayers of the liposomes. The more concentric bilayers are disrupted, the greater is the Clodronate release within the cell. The cells are killed by Clodronate through apoptosis. (N = nucleus of the macrophage).

Liposomes and Clodronate: A Short History

Liposomes as structures were discovered by ALEC BANGHAM (UK, died on March 9, 2010).

He found that amphipathic phospholipid molecules, when dispersed in water, became organized in vesicles consisting of concentric phospholipid bilayers, separated by aqueous compartments.

Hydrophilic molecules solved in the aqueous solution used for preparation of the liposomes could be encapsulated in the water compartments between the phospholipids bilayers, whereas hydrophobic molecules could be associated with the phospholipid bilayers themselves, and it was GREGORY GREGORIADIS (Greece / UK), who proposed and initiated the application of liposomes as carriers of drugs in biology and medicine (drug carrier concept).

Clodronate (dichloromethylene bisphosphonate) is a member of the family of bisphosphonates developed for the treatment of osteolytic bone diseases (Roche Diagnostics GmbH).

It shows high affinity for calcium and as a consequence adheres to bone when administered to vertebrates.

Osteoclasts, play a role in the physiology of bone by breaking it down, opposed to osteoblasts who are involved in its reconstruction. It appeared that the activity of osteoclasts could be affected by bisphosphonate molecules sticked to the bone. Given that both osteoclasts and macrophages belong to the mononuclear phagocyte system (MPS), we decided to try clodronate as one of the first effector molecules in our planned “liposome mediated macrophage suicide technique”.

This approach, in which liposomes are used as a Trojan horse for the intracellular introduction and accumulation of effector molecules was developed in the early 1980’s in order to deplete macrophages from organs and tissues in vivo. Allthough subsequently we found several other hydrophilic molecules, that were also suitable as effector molecules in the approach, clodronate may still be considered the best choice because it shows maximum efficacy and minimal toxicity.

Moreover, both liposomes and clodronate have been introduced in the clinic and it may be anticipated that their combination in the transient suppression of macrophage activity for human application would be easier to achieve than for any of the other candidate effector molecules which are known up to now.

Compared to an experiment in macrophage depleted animals, the control animals should have normal healthy, non-blocked, non-suppressed and non-activated macrophages.

As you may know, liposomes, as most other particulate compounds may block phagocytosis by saturation for certain periods of time. Moreover, it is not known exactly which other macrophage functions will be suppressed or reversely activated and for what duration.

As a result the effects of macrophage depletion in your experiments may be somewhat less than expected, if these are compared with those in controls treated with PBS liposomes, since macrophage functions in the latter animals may also be affected to some extent.

To mimic depletion treatments without affecting healthy macrophages, sham operations and injections of e.g. NaCl are sufficient. However if there is a chance that the observed effects are not due to macrophage depletion, both PBS or saline liposomes and free clodronate injections should be incorporated as control groups.

Although free clodronate has been injected in our earliest experiments, we never found an effect on macrophages. This is not surprising, since it has a very short half life (ca 15 minutes) and does not enter cells in its free form for the same reason as it does not pass the liposomal bilayers (which are comparable to cell membranes in their mostbasic form).

Actually free clodronate is injected in patients with some types of bone diseases in rather large amounts in its free form.

It is a frequently applied drug e..g. used to suppress osteoclast activity if osteoclasts are a little bit too enthusiastic in breaking down the bone tissues.

Comparison of liposome encapsulated clodronate and clodronate in its free soluble form will always be problematic, since the free clodronate will reach a very high concentration immediately after injection, which then rapidly declines since the clodronate molecules are cleared by the renal system (half life ca 15 minutes).

Please keep in mind that depletion of macrophages has to be checked in each new situation, e.g. when animal species, tissues or administration routes have not been studied before.

This is rather easy in mice and rats where macrophage markers (e.g. monoclonal antibodies) are available, but could be a serious problem in other species. Also, Macrophages have quite a large effect (mainly via cytokines and chemokines) on non-phagocytic cells such as various subsets of lymphocytes (e.g. their homing and migration).

As a consequence, especially at later time intervals after injection of clodronate liposomes, some of these cell types may temporally disappear from the spleen.

If repeated injections with clodronate liposomes keep the macrophages away for longer periods, this may have a dramatic effect leading to a much smaller spleen. 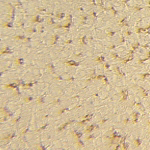 Liver of a mouse, 2 days after injection with clodronate-liposomes. Kupffer cells have been depleted Spleen of a mouse 2 days after injection with clodronate liposomes. Only few macrophages are left If you have a question please don't hesitate to ask us.